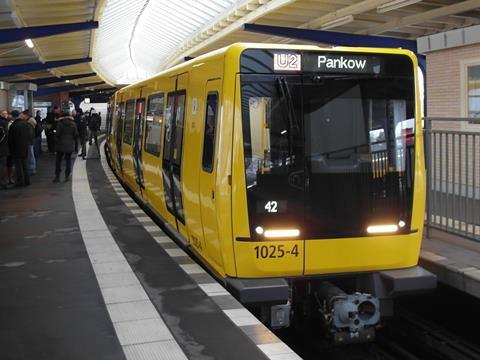 GERMANY: Plans to order up to 1 500 metro cars for the Berlin U-Bahn network have been put on hold, following a further legal challenge to the procurement, operator Berliner Verkehrsbetriebe announced on August 19.

BVG had selected Stadler Pankow as preferred bidder for the contract to replace the vast majority of its narrow and large-profile U-Bahn trains, ahead of rival bids from Alstom and a consortium of Siemens and Bombardier. However, Alstom immediately challenged the decision, lodging a petition with the Berlin Senate’s Public Procurement Chamber, claiming that BVG had changed the terms of the deal during the 2½ year tendering process. Most notably, it had increased the potential number of vehicles from 1 050 to 1 500 and shortened the delivery schedule. The manufacturers were reportedly required to guarantee the reliability of the trains for up to 30 years, even though they would be maintained in-house by BVG.

Alstom’s initial petition was rejected at the end of July, but the company lodged an appeal against the ruling shortly before the opportunity to do so expired on August 18. The case may now go to the Berlin Higher Regional Court, and according to BVG, the challenge may delay the procurement by up to two years.

Describing Alstom’s complaint as ‘regrettable’, Berlin’s Senator for Economy, Energy & Enterprises Ramona Pop told local media that ‘complaints on this scale are not uncommon, because companies are dealing with large order volumes’. There are suggestions that the legal challenge may cost as much as €3bn.

Noting that the U-Bahn fleet now has an average age of 28 years, BVG and the Senate had agreed to launch the operator’s largest ever rolling stock procurement. The original intention had been that the first 24 vehicles could be delivered from mid-2021, with deliveries ramping up to 76 cars in 2022 and 138 per year from 2023 onwards.