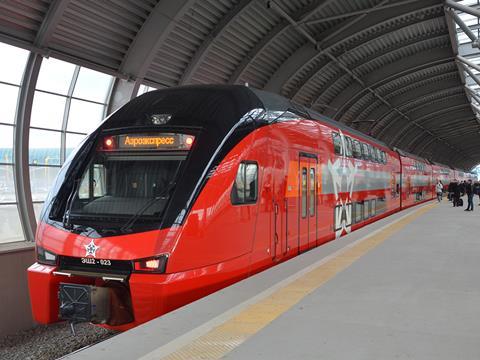 RUSSIA: Russian Railways has begun construction of a rail link to serve terminals B and C at Moscow Sheremetyevo airport’s northern terminal complex.

The first stage, to be completed in 2022, includes a 3 km mostly double-track line from the existing Sheremetyevo-2 station at the southern terminal complex to a new Sheremetyevo-1 station, which will have three tracks and two platforms. A shuttle service will connect the two stations every 15 min.

In the second stage, a line will be constructed connecting the northern terminal complex to Sheremetyevskaya on the Moscow – Savyolovo railway, augmenting the existing line to Sheremetyevo-2 which is used exclusively by Aeroexpress trains.

The project is costed at 11·8bn roubles. On completion, there will be the capacity to operate 32 trains each way per day to the south terminal and 40 to the north terminal.

Construction work is being aligned with modernisation of the Moscow – Savyolovo line as part of the Moscow Central Diameter suburban rail project.