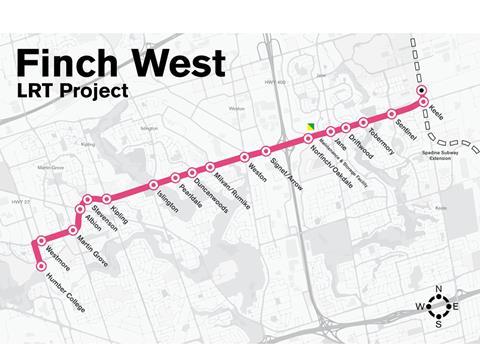 CANADA: Infrastructure Ontario and Toronto regional transport agency Metrolinx have issued requests for proposals to the three consortia which have been shortlisted for the contract to design, build, finance and maintain the Finch West Light Rail Transit project.

Proposals are to be submitted later this year. IO envisages that preliminary construction works will begin in 2016, with major works to start following financial close in 2017. Completion is planned for 2021.

The line would run on an 11 km segregated alignment between underground termini at Humber College and the future Finch West station on the Toronto-York Spadina subway extension. There would be 16 intermediate stops at ground level, plus a depot.

The project is to be undertaken using IO's Alternative Financing & Procurement model, which is intended to transfer ‘appropriate’ design, construction, financing and maintenance risks to the private sector. The line would be publicly owned, and services will be operated by Toronto Transit Commission.