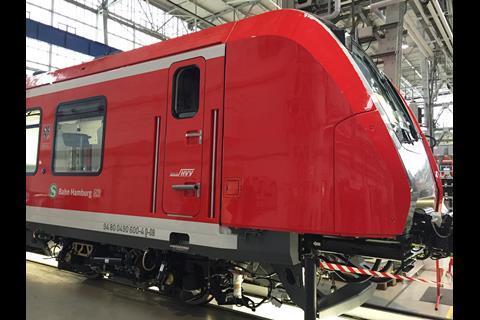 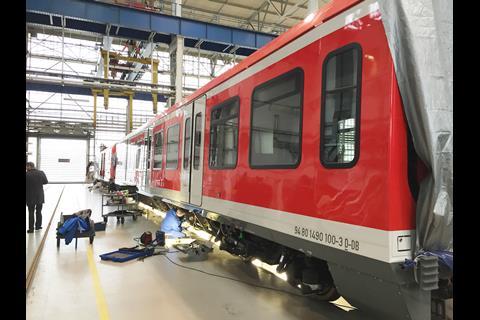 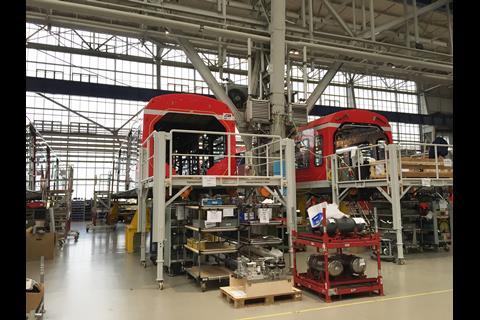 GERMANY: The first of six pre-series dual-system EMUs for suburban operator S-Bahn Hamburg GmbH is expected to begin dynamic testing before the end of the year, according to manufacturer Bombardier.

The trains are being assembled at Bombardier’s Hennigsdorf plant north of Berlin under a €327m contract placed by S-Bahn Hamburg’s parent Deutsche Bahn in June 2013. This covers an initial 60 trains, with options for up to 86 more. The build of 60 is split into two batches, 29 being single voltage sets for use on the 1 200 V DC third rail S-Bahn routes, and the remaining 31 also equipped for use on the 15 kV 16·7 Hz main line network to facilitate the expansion of S-Bahn services.

Designated Class 490 by DB, each three-car trainset will be 66 m long, with the DC trains capable of a maximum speed of 100 km/h and the dual-systems trains equipped for 140 km/h running. Final assembly is being undertaken at Hennigsdorf, with car bodies coming from Wrocław and bogies from Siegen. Following completion of the six pre-series trains, series production is expected to start in March 2017 with delivery to conclude by the end of 2018.

Bombardier said the EMUs would have a 'striking and dynamic exterior design'. They will have three twin-leaf doors per coach side, with wide entrances and aisles to facilitate rapid passenger flow into the 'transparent and passenger friendly interior'. There will be a multi-purpose area with space for two wheelchairs, prams, bikes or large luggage. Real-time passenger information will give details of connecting services. There will be a 'compact' air-conditioning system, and waste heat from the traction equipment will be used to heat the passenger saloon.