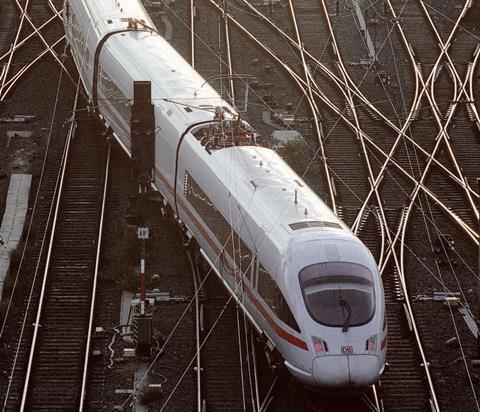 GERMANY: The first of 42 tilting inter-city trainsets operated by DB has entered DB Fahrzeuginstandhaltung’s Nürnberg workshops under a €30m refurbishment programme running to 2015.

The fleet of 11 five-car and 31 seven-car ICE-T trainsets is to receive a series of exterior and internal enhancements, including an external repaint, seat replacement, improvements to interior fittings aimed at passengers with reduced mobility, and renewal of smoke detection equipment. DB is also to install onboard wi-fi. Two extra seats are to be fitted to the first class driving car of each set.

Technical modifications include fitting the fleet with ETCS Level 2 onboard equipment for use on the Leipzig/Halle – Erfurt high speed line, which opens in 2017.

DB has also released an ICE-T trainset into traffic with two refurbished vehicles to sample feedback from passengers ahead of the start of work to refurbish its ICE3 high speed trains. One of the vehicles is a revamped restaurant car, while other modifications include a novel LED lighting arrangement and redesigned toilets.

Cleared for operation at up to 230 km/h, the ICE-T fleet typically operates routes between Frankfurt-am-Main and Dresden, Hamburg and München and cross-border services on the Dortmund – Passau – Wien corridor, DB says.