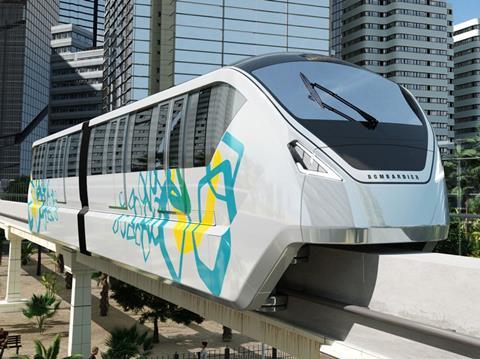 EGYPT: Bombardier Transportation has been named preferred bidder for a contract to design a build two monorail lines in Cairo.

The contract announced on May 27 is still subject to signature and final confirmation. Bombardier Transportation would undertake the project in partnership with local companies Orascom Construction and Arab Contractors.

The design and build contract is potentially worth €1·2bn for Bombardier Transportation, and a 15-year operations and maintenance deal would add a further €1·1bn.

Bombardier said the rolling stock for the lines would be developed and built at its Derby plant in the UK.

According to local reports, the other bidders for the contract were a consortium of CRRC, China Railway Construction Corp and local partners Concorde and Samcom, and a consortium of Malaysian firm Scomi, the Ministry of Military Production and Arabtec Construction.