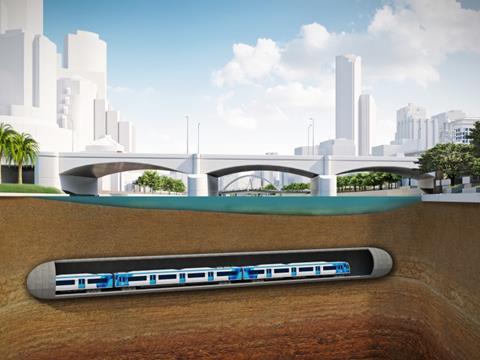 AUSTRALIA: The government of Victoria has selected preferred bidders for the civil works and railway systems packages of the Melbourne Metro tunnel project.

The Tunnels & Stations works package is to be awarded to the Cross Yarra Partnership consortium of Lendlease Engineering, John Holland, Bouygues Construction and Capella Capital. The A$6bn design-build contract covers construction of a 9 km city centre tunnel with five underground stations that would connect the Sunbury line to the Cranbourne and Pakenham lines.

A 50:50 joint venture of CPB Contractors and Bombardier Transportation has been selected as preferred bidder for the A$1bn Rail Systems Alliance package.

John Holland is currently carrying out early works, and main construction work is scheduled to begin next year. The tunnel is due to be completed by 2026.

The A$11bn project forms part of a larger programme to increase capacity on the city’s 1 600 mm gauge suburban network. A contract for the supply and maintenance of 65 seven-car electric multiple-units was awarded last year to CRRC Changchun and Downer Group.