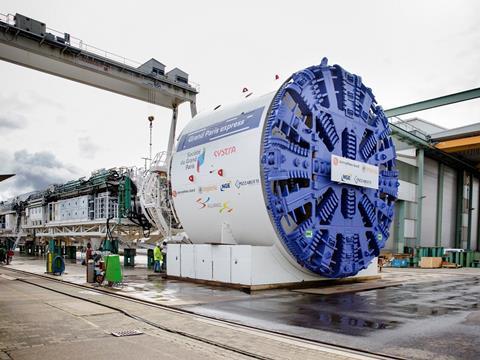 FRANCE: Société du Grand Paris has announced the award of construction contracts for sections of Lines 14, 16 and 17 which need to be completed in time for the 2024 Olympic Games. Worth €1·84bn, the work has been placed with a group formed of Eiffage Génie Civil, Razel Bec, Eiffage Rail, TSO and TSO Caténaires.

Funding for the works was covered in a revised budget approved by SGP’s Supervisory Council on February 13.

In the meantime, details of a revised timescale for the rest of the project are expected to be announced formally. At a meeting with mayors and local authorities affected by the project on February 16 Transport Minister Elisabeth Borne confirmed that construction of many sections of the various lines will be delayed. Earlier, on January 26, Prime Minister Édouard Philippe had indicated that the project would go ahead in its entirety, but not to the original timescale.

Few firm details were available after the meeting on February 16, but suggestions that construction of some sections could take up to five more years than previously envisaged provoked angry reactions from the President of the Ile de France region Valérie Pécresse and other officials representing towns and communities along the affected routes.