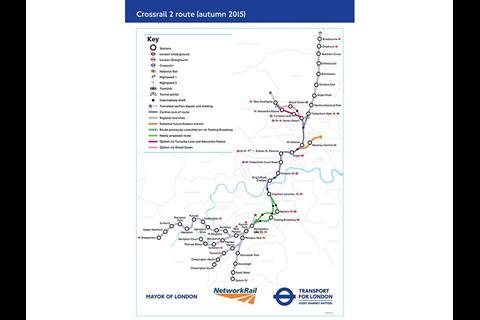 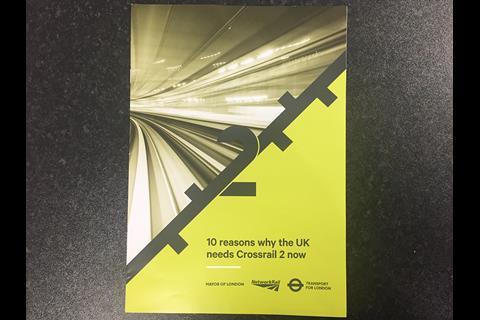 UK: The Crossrail 2 proposal to link railway routes in Surrey and Hertfordshire via a new tunnel under central London would not merely provide a cross-city suburban link like the Elizabeth Line, but instead would be a ‘transformational’ project providing direct benefits ‘from the Wash to the Solent’ while also supporting UK-wide transport and economic needs, Crossrail 2 Managing Director Michèle Dix told a joint meeting of the all-party parliamentary groups for London and Crossrail 2 on September 13.

Dix said the current aim is to safeguard the corridor with a view to a hybrid bill being passed in the 2020s enabling construction to go ahead for opening in the early 2030s.

The ‘huge benefits’ impacting on a corridor stretching 260 km from Portsmouth to Cambridge would come with a ‘large price tag attached’, said Dix, requiring 70 km of tunnels, around twice as much as the Elizabeth Line, and costing twice as much at around £31bn, but ‘we are doing lots of value engineering’.

Dix said Crossrail 2 would create 60 000 supply chain jobs during construction, and when complete would support a further 200 000 new jobs. MP for Tottenham and Chair of the Crossrail 2 APPG David Lammy said he wanted to ‘disabuse anyone who might think it is another treat for London’, saying Crossrail 2 was a ‘national project’, which would be ‘hugely important to manufacturers in the North and Midlands’.

Supporting an increase in housing is a major focus of the project, and National Infrastructure Commission CEO Phil Graham emphasised the importance of ensuring than planning mechanisms are put in place to ensure homes can be developed in parallel with the project.

Dix said Crossrail 2 would ‘unlock’ an additional 200 000 homes by improving access to suitable development sites, 30% of which would be outside London.

Leader of Barking & Dagenham council Darren Rodwell was blunt about the economic importance of London, saying ‘if London doesn’t work, the country fails’. Stressing that he was ‘not saying this because we are London and only London matters’, he called for a ‘proper adult conversation’ about how Crossrail 2 should be paid for, suggesting that stamp duty should be retained in London, and politicians should ‘make sure the private sector puts its hands in its pockets.’

Questions from the audience suggested funding would need to take different approach to the Elizabeth Line, where the direct link to Canary Wharf made attracting business support easier; many of the benefits of Crossrail 2 would be to residents, and so value would need to be captured differently. Cambridge MP Daniel Zeichner said the city was interested in the use of value capture models, as it would face ‘real problems’ without more rail capacity.

In answer to a public and political perception than schemes in southeast England benefit London alone, Graham said no other projects nationally ‘tick all the boxes’ that Crossrail 2 does, but also stressed the importance of looking at projects such as HS3 in parallel.

According to a brochure produced by the Mayor of London, Transport for London and Network Rail, the Crossrail 2 project would: