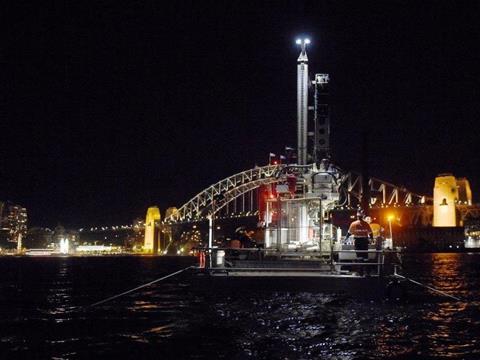 AUSTRALIA: The New South Wales government has awarded a A$2·81bn civil works contract for the construction of the Sydney metro cross-harbour tunnel to a joint venture of John Holland (45%), CPB Contractors (45%) and Ghella (10%).

The scope covers twin 15·5 km tunnels between Chatswood and Sydenham, as well as the construction of six stations. There will be 57 cross-passages between the tunnels, a temporary access shaft at Blues Point, and a crossover cavern at Barangaroo. Around 99 000 precast concrete tunnel lining segments would be used.

The tunnels will be bored using four double-shield hard rock gripper tunnel boring machines and one specialised TBM to tunnel through a combination of sandstone, clay and sediments between North Sydney and Barangaroo. Spoil will be removed by barges.

Tunnelling is due to be completed in 2021, with services on the full 66 km Sydney metro expected to begin in 2024.

The work forms part of the Sydney Metro City & Southwest project, which is expected to cost between A$11·5bn and A$12·5bn.

In January 2016 a consortium of CPB Contractors, John Holland and Dragados completed tunnelling on the first phase. Four TBMs were used to bore 15 km twin tunnels between Bella Vista and Epping under a A$1·15bn contract awarded in June 2013. This forms part of the A$8·3bn Sydney Metro Northwest project, with services on this section of the metro due to start 2019.