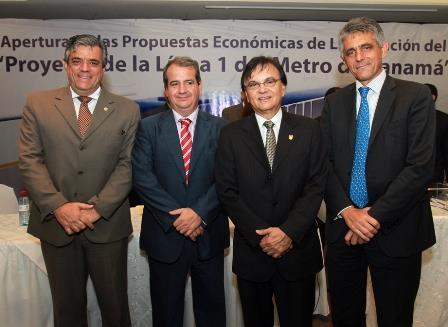 PANAMA: Roberto Roy, head of the Panamá Metro Secretariat, announced on October 27 that the Línea Uno consortium, comprising Odebrecht and FCC, had been awarded the contract to build Panamá City’s first metro line.

The decision was made at a public meeting when two economic proposals were opened in the presence of Ricardo Martinelli, President of the Republic of Panamá. CIMA, the third prequalified consortium comprising Acciona Infraestructuras, Mitsubishi Corp, MHI, CAF and Constructoras ICA of Mexico, did not submit an offer by the August 30 deadline.

Línea Uno bid US$1 447m, slightly higher than rival consortium Grupo Italiano Metro Panamá, which offered to build the 14 km line from Los Andes to Albrook for US$1 401m. However, the Brazilian-Spanish consortium achieved a better score in the technical appraisal, achieving a total of 917 points out of a possible 1 000, while the Italian grouping of Impregilo, Astaldi and Ghella scored 708. Work is scheduled to start in January 2011 for completion in December 2013.

Feasibility studies for a second metro line should be completed before Martinelli’s term in office ends in mid-2014. The project forms part of the President’s efforts to modernise the public transport network in Panamá.