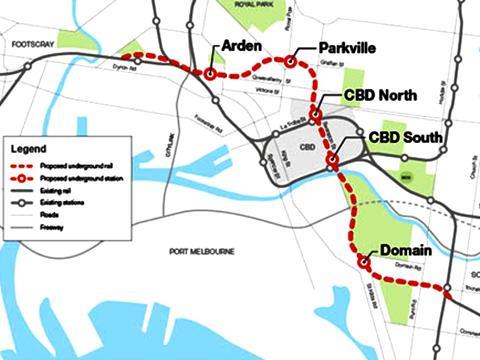 AUSTRALIA: A joint venture of Aurecon, Jacobs and Mott MacDonald has been appointed as the technical, planning and engagement adviser for the Melbourne Metro Rail cross-city tunnel.

Project delivery organisation Melbourne Metro Rail Authority has been allocated an initial A$40m to develop proposals for the 9 km link, which is intended to connect the proposed Airport branch and the Sunbury line northwest of the city to the Cranbourne and Pakenham lines in the southeast.

The route would run in twin-bore tunnels between South Kensington and South Yarra, with five underground stations, including two tram interchanges.

According to the Victorian government, the new route would increase peak capacity of the suburban network by 20 000 passengers/h.

Total cost of the project is put at between A$9bn and A$11bn, with construction planned to start in 2018 for completion by 2026.