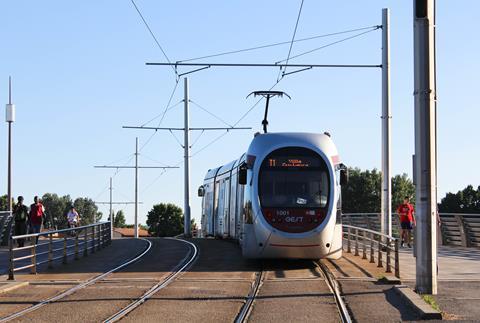 ITALY: The Ministry of Infrastructure & Transport has allocated €250m to build a further tram line in Firenze, and to procure 14 more vehicles.

The city already has two modern light rail lines linking the historical core with outlying suburbs, but various additions and extensions are either approved or planned. The latest route to be approved will link Piazza Liberta in the centre with Rovezzano main line station to the east, serving 15 stops on a 6 km alignment.

Peak headways will be 5 min, and the expected ridership is 12 million passengers a year. Works are expected to last three years from the start of construction.

The new line will be facilitated by completion of a number of other extensions to the existing network. These include an extension of Line 2 from Piazza dell’Unità Italiana to Piazza San Marco via Piazza Liberta, and a line from Piazza Liberta to Bagno a Ripoli in the southeast of the city. The national government allocated €200m for these works last December.

Longer term plans for further routes include partial conversion of a railway alignment to create a 12 km corridor between Porta al Prato and Campi Bisenzio in the west. In the north of the city, an extension of Line 2 is envisaged from the city’s airport to serve Sesto Fiorentino-Polo Scientifico.