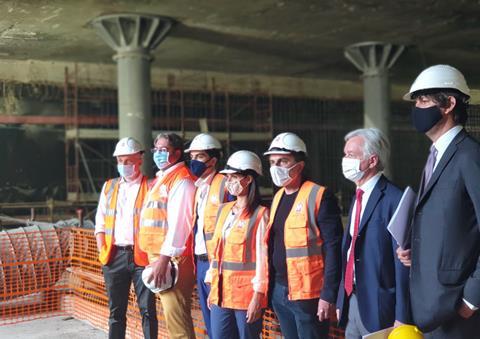 ITALY: Construction of metro Line C in Roma reached another milestone on August 6 when a tunnel boring machine broke though at Piazza Venezia, having excavated one bore from Colosseo.

A second TBM is expected to reach the site of the future Venezia station in September. Both machines will then reverse and work back as far as Amba Aradam, where they are due to be disassembled and removed.

The first section of the long-planned Line C opened in November 2014 using a converted section of a former interurban light rail line. The 18∙5 km route now runs from Pantano in the east as far as San Giovanni, from where it is being extended westwards through the historic city centre. The section from San Giovanni to Colosseo is due to open in 2025. 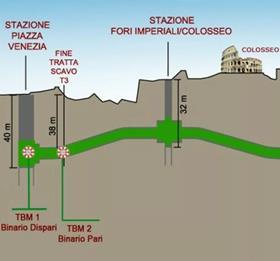 Line C is intended to run as far as Clodio-Mazzini in the northwest of the capital. The plan was to launch TBMs from there and bore back towards the city centre, but funding to complete the later phases has not yet been agreed. As this could have left the key tourist hub of Piazza Venezia without a metro station for many years, the city authorities opted last July to add the Colosseo – Venezia tunnelling work into the San Giovanni – Colosseo construction package.

However, the fit-out of Venezia station is still not fully financed. Visiting the construction sites on July 23, Mayor Virginia Raggi said the municipality would ask for support from the transport ministry.