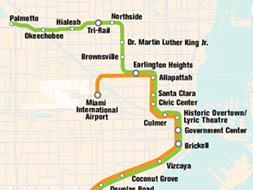 The groundbreaking for the AirportLink Metrorail Extension was held in May 2009. The 3·8 km elevated branch starts at Earlington Heights station on the existing Green Line, and terminates at Miami Intermodal Center, a multi-level interchange with bus, taxi, coach, metro and rail services which is scheduled to be completed next year. The MIA Mover automated peoplemover provides access to the airport itself.

The $506m project was funded by the Florida Department of Transportation ($101·3m) and a sales tax introduced under the People's Transportation Plan ($404·7m). Construction was undertaken by a joint venture of Odebrecht and OHL's Community Asphalt and Tower businesses.

Journey time on the new section is 4 min. Orange Line services from the branch share tracks with the Green Line to reach Dadeland South, serving a total of 16 stations.

'With this new service to the airport, every hotel and business in downtown Miami, Coconut Grove, Hialeah, Kendall and everywhere else along the Metrorail system will now be at the front door of Miami International Airport, the largest economic engine in the region', said Miami-Dade Transit Director Ysela Llort.