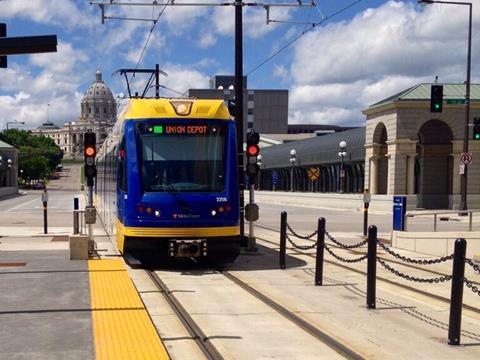 The line would form an extension beyond Target Field of the Green Line from St Paul which opened on June 14. At the end of August, Minneapolis City Council voted 10:3 to approve the project and its preferred alignment, the last of the local authorities along the route to do so.

HTNB has been appointed to undertake a peer review of the project design, including a proposed tunnel through Kenilworth, and the project office has issued a Request for Proposals shortly for the advanced design contract. Covering track, structures, stations, park-and-ride facilities, streetscape works and utility relocation, this is to be awarded by the end of the year.

The federal government is expected to publish a Supplemental Draft Environmental Impact Statement for consultation in early 2015, leading to a final EIS later in 2015. Opening in 2019, the line is forecast to be carrying around 34 000 passengers/day by 2030.

Meanwhile, Metro Council has received FTA approval to start preliminary engineering on a fourth light rail line. Also known as the Bottineau LRT, this 21 km route would extend the Blue Line northwest from Target Field to Robbinsdale and Brooklyn Park. Expected to open around 2021, this extension could be carrying 27 000 passengers/day in 2030.