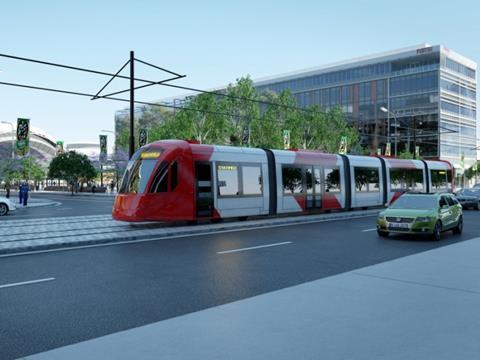 AUSTRALIA: Transport for New South Wales has awarded contracts for the construction and operation of Stage 1 of the Parramatta light rail project.

A joint venture of Downer and CPB Contractors has been awarded the A$840m civil works contract, while the A$536m fit-out and operations contract has been signed by the Great River City Light Rail consortium of Transdev and CAF Rail Australia.

Major works are due to begin this year, with opening planned for 2023. The 12 km route between Westmead and Carlingford via Parramatta CBD and Camellia would offer peak services every 7½ min. NSW Minister for Transport & Infrastructure Andrew Constance has confirmed the final budget for the project as A$2·4bn.

There are to be no overhead wires on around 4 km of the route, between Westmead and Cumberland Hospital, and between Prince Alfred Square and Tramway Avenue.

CAF is to supply a fleet of 13 seven-section light rail vehicles 45 m long with capacity for 300 passengers. These will be stabled at a maintenance depot at Camellia.