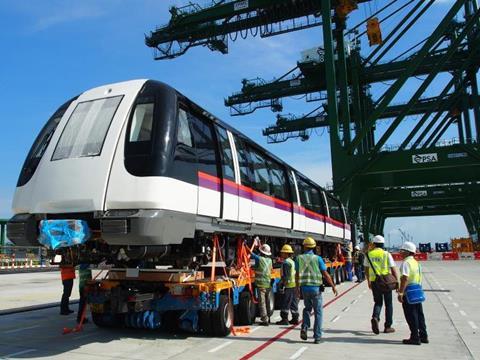 SINGAPORE: Land Transport Authority has awarded CRRC Nanjing Puzhen a S$116·7m contract for the midlife overhaul of the first-generation trains operating on the North East Line.

Alstom supplied the 25 six-car trainsets for the opening of the North East Line in 2003. The overhaul will include new interiors, as well as the installation of a condition monitoring system, and improvements to the HVAC and passenger information systems.

Work is scheduled to start in the first quarter of 2019 and end by the third quarter of 2024. The trains are to be overhauled one by one at the line’s Sengkang depot.

The rolling stock refurbishment is the first part of an upgrade of the North East Line, which is being undertaken by the LTA and operator SBS Transit. Funding is being provided by the government under the New Rail Financing Framework.

Services on parts of the line will end earlier than normal between January and March 2019 to allow work to take place on the power supplies and platform screen doors, as well as track replacement.