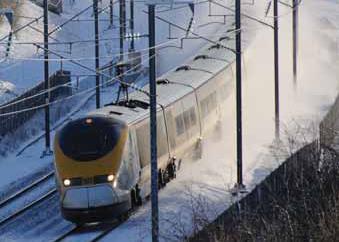 EUROPE: The findings of the independent review commissioned to look into the collapse of Eurostar cross-Channel services during the severe snowstorms on December 18-19 were announced in London on February 12.

Following pressure from the French transport minister Dominique Bussereau, Eurostar had asked former GNER Chief Executive Chris Garnett and Ingénieur-Général des Ponts et Chaussées Claude Gressier to investigate the failure of five trains inside the Channel Tunnel, the subsequent evacuation and suspension of services, and the lessons that needed to be learned to prevent a recurrence.

The report reveals a host of problems, starting with inadequate maintenance and winterisation of the ageing trainsets and design failings in the complex power cars which need to be addressed at or before the forthcoming mid-life refit. There were also concerns about conditions on the trains following the loss of power for lighting and ventilation. The recovery and evacuation of the trains were hindered by poor communication between the Eurostar and Eurotunnel control centres and the people on the ground, aggravated by inadequate staff training and a lack of focus on keeping passengers informed during the disruption.

Garnett and Gressier believe that many of the underlying problems can be traced back to the complex tri-national joint venture behind the current Eurostar structure, and hope the planned restructuring to form a single integrated company should improve the situation. They did not call for changes to the senior management, suggesting that this would only hinder the need to implement the report’s recommendations as soon as possible.

Welcoming the ‘comprehensive’ findings, the Eurostar Board committed to ensuring ‘that all of the review’s recommendations will be implemented as quickly as possible’, adding that ‘a series of actions is already underway’. More than £30m is being invested to ‘improve the resilience of the Eurostar trains during severe winter conditions’ as well as improving ‘passenger care during disruption and customer communication both inside and outside the Tunnel.’ Eurostar said £12m had already been earmarked for a new tunnel communications network.

Noting that the restructuring is ‘well advanced’, Eurostar agreed that this would pave the way for ‘greater consistency of service standards across the three countries’. Pending completion of the process, which will see him take over as Chairman of Eurostar International, the current Chief Executive Richard Brown will become Deputy Chairman from April 5, and Chief Operating Officer Nicolas Petrovic will take over as Chief Executive from the same date. Richard Morris, who was at one time Railway Operations Director for Eurotunnel, has been brought in to a new post as Director of Business & Service Continuity, responsible for implementing the improvements recommended by the review.