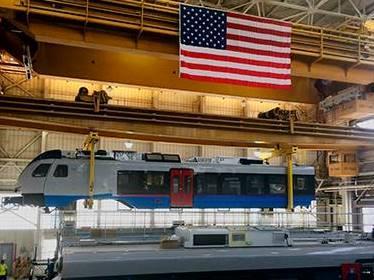 USA: Stadler has completed the first Flirt multiple-unit to be assembled in the USA at its plant at North Salt Lake in Utah. The DMU for the TEX Rail project will be officially unveiled at the ATPA Expo in Atlanta in October.

In 2015 the Fort Worth Transportation Authority signed a $100m contract with Stadler for the supply of eight DMUs. This was Stadler’s first contract to include federal funding and was thus subject to Buy America regulations requiring 60% of the contract value to be sourced in the USA. The bodyshells and bogies are being produced in Switzerland, with final assembly taking place in Utah.

Groundbreaking ceremonies for the TEX Rail commuter route were held in August 2016. Due to open in 2018, the 43 km line would link central Fort Worth with Dallas-Fort Worth International Airport. Around half of the $1bn cost, which includes rolling stock, is being met from federal sources.