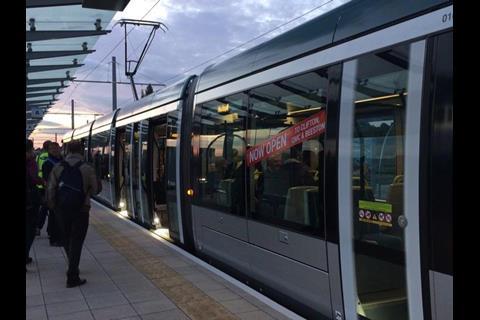 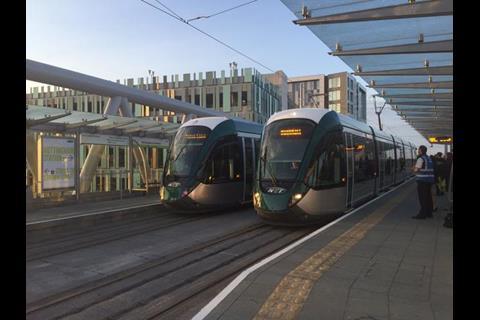 UK: The first passenger service on Nottingham Express Transit Phase 2 departed from Clifton South at 06.02 on August 25, marking the opening of two new branches on the city’s tram network.

The routes to Clifton South and Toton Lane diverge at Nottingham station tram stop, the previous southern terminus of the route from Hucknall and Phoenix Park. The stop has been remodelled as part of the Phase 2 works, which include the Karlsruhe Friendship Bridge installed over the main line station in 2013.

The new alignments total 17·5 km, thereby more than doubling the initial 14 km route. There are more than 2 000 park-and-ride spaces at the new termini, and a tram and bus interchange has been built in Beeston.

The project was granted legal powers in 2009. Construction was carried out by a joint venture of Alstom and Taylor Woodrow. Alstom was responsible for trackwork, electrification, signalling and the supply of 22 Citadis trams, which arrived between mid-2013 and mid-2014. To accommodate the enlarged fleet, the Wilkinson Street depot has been expanded to double its size. Meanwhile, the older fleet of 15 Bombardier Incentro trams has been refurbished.

‘This is a really great day for Nottingham’, said Jane Urquhart, the city councillor with lead responsibility for NET. ‘It marks the dawn of a new era when NET becomes a true network and, with trams running from every seven minutes, it is all set to provide easier access to key locations right across the city.’