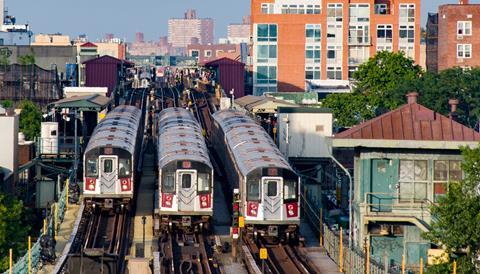 USA: New York Metropolitan Transportation Authority announced its 2020-24 Capital Plan on September 16. The proposed $51·5bn investment is 70% more than the current five-year plan, making it the largest capital plan in MTA history, according to the authority.

The investment is to be funded from a mix of sources. The largest would be $25bn from bonds backed by new revenue streams authorised in this year’s state budget, and a further $10bn is to come from bonds backed by newly established revenue sources dedicated to public transport. MTA is to provide $9·8bn in the form of pay-as-you-go capital contributions and bonds backed by dedicated taxes, fares and toll revenue. The MTA expects $10·68bn in federal funding, and has asked the City of New York for $3bn. The State of New York has already pledged $3bn, subject to approval by the state legislature.

The proposed plan will be reviewed by the MTA board on September 25. If approved, it would be submitted by October 1 to the MTA Capital Program Review Board.

The Subway is to receive investment worth $37·3bn. Priorities include modernisation of signalling on six lines, which has $7·1bn in the Capital Plan. A further $6·1bn is to be spent on procuring 1 000 B-division cars and 900 A-division cars.

A programme to make 70 stations ADA accessible would receive $5·2bn. Work on four of these is to take place within the 2015-19 Capital Plan. A further $4·1bn is to be spent on other improvements that will see the renewal of components at 175 stations, including 78 lifts and 65 escalators.

Phase 2 of the Second Avenue Subway is allocated $4·55bn in 2020-24, which would complete the $6·9bn cost of the project that is partly covered by the current capital plan. The funding for the three-station second phase would be split equally between federal and MTA sources.

Subway track renewals are to receive $2·6bn. This would cover replacement of around 100 km of track and installation of around 30 km of continuous welded rail.

Long Island Rail Road is to receive a total of $5·7bn. Priority investments include track work that would bring more than 90% of infrastructure assets to a state of good repair. Around $1bn is to be spent of concrete sleepers, continuous welded rail and the reconfiguration of the complex junctions at Jamaica.

A further $910m is to be spent to make up to seven stations ADA accessible and replace platforms, lifts and escalators at more than 20 stations. MTA would spend $487m on new rolling stock, including 160 M9A cars that would expand the fleet size by 13%, and 20 coaches and 10 locomotives for non-electrified routes.

Other infrastructure enhancements are to receive $364m. In addition to replacing signalling on three branches with obsolete equipment, communications equipment is to be upgraded, and 32% of turnouts, 21% of track circuits and 11% of level crossing equipment is to be replaced.

A similar investment is to be made on Metro-North Railroad, which has been allocated $4·7bn in the Capital Plan. Of this, $895m is to be spent on upgrading infrastructure that is more than a century old. This includes the first phase of replacing the 30 ha Grand Central Terminal trainshed and the 2·9 km Park Avenue Viaduct, as well as adding four emergency exits to the Park Avenue Tunnel.

Accessibility improvements at up to four stations, together with station refurbishment on the Harlem and Hudson lines, are to receive $621m, while $485m is to be spent of the replacement of 140 M3 electric multiple-unit cars. The West of Hudson Improvements project receives $187m in the Capital Plan.

The Harlem Line Capacity Improvements programme is to receive $184m. This covers work to support a future third track, including building two electrical substations, designing three more, and relocating and expanding parking at Southeast station to allow for the future Brewster Yard expansion.

The Capital Plan also includes funding for bus improvements. The largest item is $2·3bn for the replacement of 2 200 of the oldest buses, comprising 39% of the city’s fleet. A further $217m is to be spent on the purchase of 175 vehicles to enlarge the fleet.

A total of $1·1bn is to be spent on the purchase of 500 electric buses and modification of up to eight depots to accommodate the new vehicles. MTA aims to procure only electric buses from 2029.

MTA plans to accelerate the roll-out of onboard real-time passenger information screens, and to add bus lane cameras and equipment for traffic signal priority; these measures are budgeted at $109m.