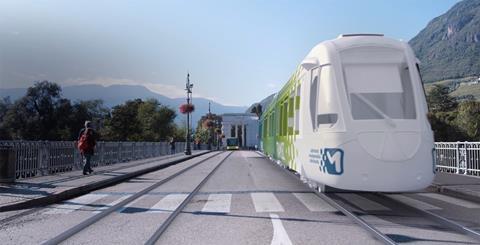 ITALY: The Bolzano city authorities presented plans for a tramway to be built in the South Tirolean city under the TRAM.BZ brand on November 6.

The 7·2 km tramway would serve 17 stops on a Y-shaped east-west alignment. Services would be operated as two routes, which would share track between the railway station and Bivio Merano. L1 would continue north on a branch to Ospedale via Bivio Merano, while L2 would run south to Ponte d’Adige railway station on the Bolzano – Merano line.

Services on L1 are envisaged to run every 10 min in the peaks, with an end-to-end journey time of 19 min, and L2 would run at 30 min headways with a journey time of 21 min. Dwell times would be 20 sec. Service frequencies could be increased in the future.

The trams would have priority at road junctions, and 1·3 km of the route in the historical city centre would be catenary-free.

The total project cost is estimated at €192m, which includes €125m for construction and €25m for a fleet of bidirectional trams with capacity for 260 passengers. The national government and the city would each provide €40m, with the remaining costs to come from state subsidies from the Sustainable Mobility Fund.