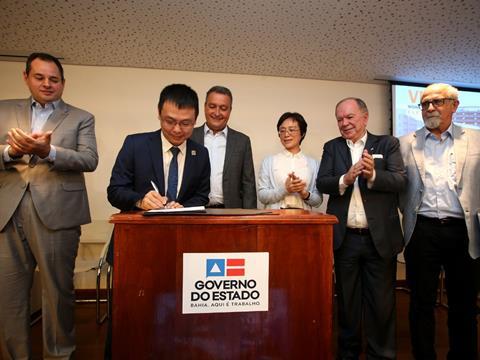 BRAZIL: Governor of Bahia Rui Costa has signed a PPP concession with a consortium of BYD Brazil and Metrogreen, which is to build and operate a straddle monorail line in Salvador.

The BYD-led consortium had signed an initial agreement in May 2018. With the contract signing, work can now begin in around six months, with the first phase due to open in 2021.

The 20 km route linking the city centre with São João Island is expected to carry 150 000 passengers per day. It will provide interchange with the city’s existing metro network.

The R$2·5bn project will use BYD’s SkyRail automated monorail, which is already operational in the Chinese city of Yinchuan. BYD says that this would be able to climb gradients of up to 20%. Parks are to be developed under the elevated line, and stations will include ‘community facilities’ such as police stations.