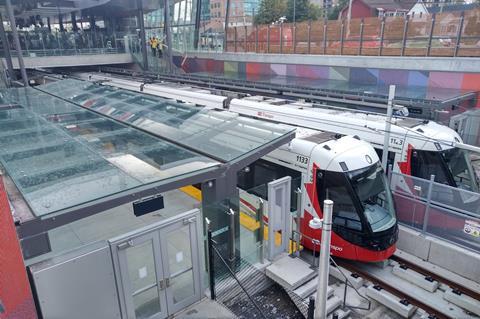 CANADA: The Confederation Line was inaugurated in Ottawa on September 14. Also known as O-Train Line 1, the 12·5 km light rail line links Tunney’s Pasture in the west with Blair in the east.

Three of the 13 stops are in a 2·5 km tunnel under the city centre, and interchange with the Trillium Line is provided at Bayview near the western end of the Confederation Line. The city’s bus network is due to be reconfigured on October 6 to align bus routes with the light rail line.

The Confederation Line project was approved in December 2012 and construction began in 2013. The Rideau Transit Group consortium of SNC-Lavalin, ACS Infrastructure, EllisDon, Dragados Canada and Veolia Transportation Services built the line, and Alstom is maintaining the infrastructure for 30 years.

Services are operated with a fleet of 34 Citadis Spirit low-floor light rail vehicles supplied by Alstom under C$575m contract awarded in 2013. The line has a design capacity of 10 700 passengers/h per direction.

The C$2·13bn Confederation Line project was jointly funded by the federal government, the province of Ontario and the city of Ottawa.