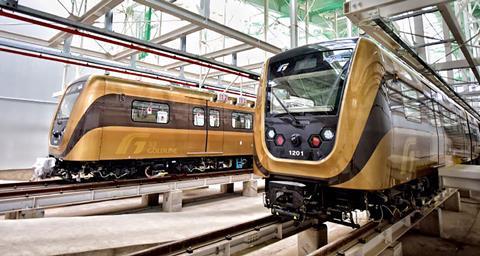 The 23·7 km driverless metro line runs north-south from the Yangchon district to Gimpo International Airport. There are 10 stations, including an interchange at the airport with metro lines 5 and 9, as well as AREX airport express services.

The line runs mostly underground, coming above ground just before the northern terminus. All stations are equipped with platform screen doors.

Hyundai Rotem has supplied 23 two-car Series 1000 trainsets. The driverless vehicles have a maximum speed of 80 km/h and are stabled at the Gimpohangang depot near Yangchon.

Construction of the Gimpo Gold Line started in March 2014 and was managed by South Korea Railroad Authority and Seoul Transportation Corp. The 1·6tr won cost was financed from Korea Land & Housing Corp (1·2tr won) and the city of Gimpo (30·9bn won). The original opening date was planned for November 2018.