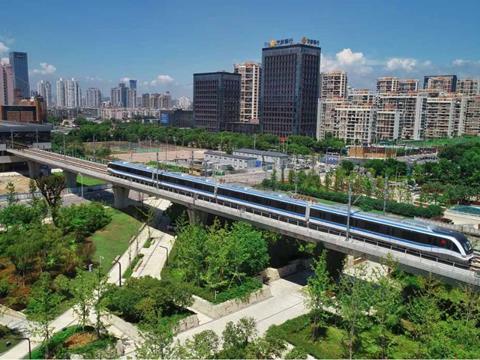 Most of the line is elevated, with Tongling station at-grade and Olympic Centre station underground. The end-to-end journey time is 50 min.

Services operate with a fleet of 32 four-car Type D electric multiple-units supplied by CRRC Qingdao Sifang under a contract awarded in 2014. The 120 km/h EMUs are 3 300 mm wide with capacity for 1 328 passengers including 192 seated. They are stabled at a depot near Tongling.

An 18·7 km eastern extension is under construction. This would add six stations between Olympic Centre and Shuang’ou Avenue via Wenzhou Longwan International Airport. In the longer term, a third phase will bring Line S1 to 77 km with 28 stations.

A second suburban line is also under construction. Line S2 will eventually be 71·7 km long.