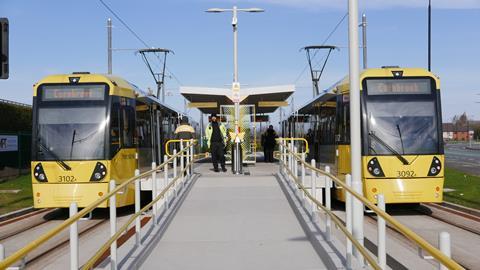 Trafford Centre, terminus of the new Metrolink route, is served by trams running as far as Cornbrook.

UK: The 5·5 km Manchester Metrolink light rail extension to the Trafford Centre shopping complex was opened for revenue service on March 22, around seven months ahead of the original target date.

Strongly backed by a public consultation in 2014, the project was the first to benefit from Greater Manchester’s regional devolution deal signed in November 2014, and received a £20 million contribution from Trafford Council. The £350m construction contract was awarded in 2016 to the MPact Thales consortium which includes VolkerRail and Laing O’Rourke. WSP Parsons Brinckerhoff acted as TfGM’s delivery partner. 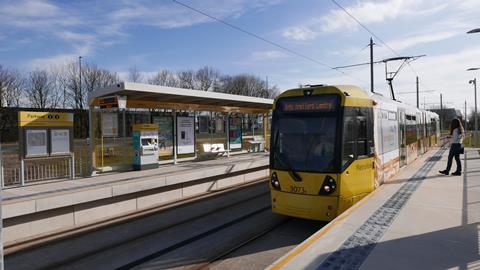 Parkway is in the heart of the Trafford Business Park, and provides park-and-ride facilties.

Running through Europe’s largest industrial estate, the Trafford Park line runs provides access to thousands of jobs, including global companies such as Kellogg’s, Unilever, L’Oreal and Adidas. As well as the intu Trafford Centre other leisure destinations along the route are Manchester United’s Old Trafford stadium and the Imperial War Museum North. 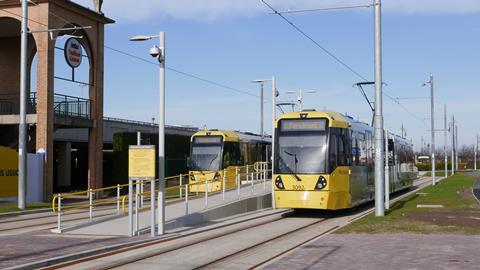 The Trafford Centre stop is adjacent to the main shopping centre, whilst a second stop at EventCity serves the exhibition venue.

The line is initially being served by a shuttle between Cornbrook and Trafford Centre, operating at 12 min intervals in common with other Metrolink routes. Delivery of 27 additional M5000 trams to augment the 120-strong fleet by August 2020, will enable services to be extended through the city centre to Crumpsall where a new turnback platform has been constructed.

Mayor of Greater Manchester, Andy Burnham, said the new line was ‘a much-needed addition to the Metrolink network’ which would ‘encourage more people to use public transport to journey around our city-region, and in doing so reduce congestion on our roads and improve the quality of our air’.

TfGM Chief Executive Eamonn Boylan noted that ‘a project of this size and scale is a huge undertaking and we are pleased at how smoothly it’s come together, meaning we’re opening the line much sooner than we anticipated. I have no doubt it’ll make a huge difference to the area, particularly to the many local businesses.’ 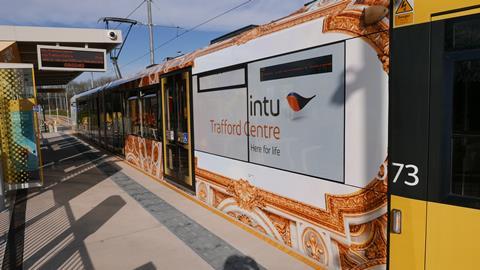 Transport for Greater Manchester and operator KeolisAmey have introduced a revised timetable across the whole network, aimed at improving resilience to anticipated staff shortages and reflecting reduced usage during the coronavirus outbreak. This is based on a Sunday service pattern, with 12 min frequencies on all lines, with LRVs operating in pairs to provide more space for social distancing between passengers.