CANADA: A phased approach to building the 20 km light rail Green Line was approved by Calgary City Council on June 16. 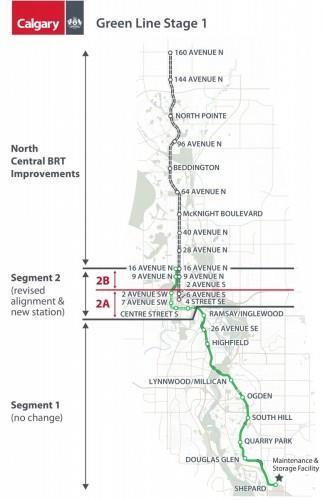 Construction of Stage 1 is due to begin in 2021 for opening in 2027 at an estimated cost of C$4·9 bn. This covers the 15 km from Shepard in the southeast to the Elbow River crossing east of the city centre, serving nine stops. A depot at Shepard will house a fleet of 40 to 45 light rail vehicles; these will be low-floor cars, in contrast to the high-floor LRVs used on C-Train’s existing Red and Blue lines.

The 5 km city centre segment would be built under Stage 2. This has been split into two sub-phases with construction due to start on both in 2022. Stage 2A covers the 3 km from Elbow River to 2 Ave SW to the north of the city centre. It includes 2 km of tunnel and four stops, of which three will be underground. Stage 2B would take the line across the Bow River and north to 16 Ave N, adding another two stops.

Outline plans for the Green Line were approved in June 2017. The line was originally envisaged as a 46 km route with 28 stations, but the northern section to 160 Avenue N will be served initially by bus rapid transit and a southeast extension from Shepard to Seton has also been deferred.