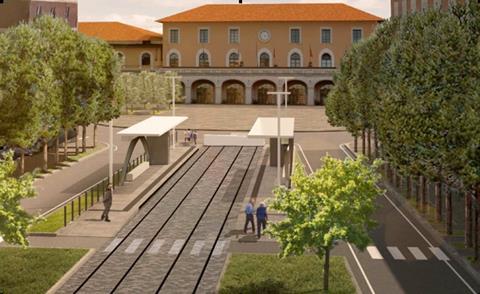 ITALY: The city of Pisa has approved plans to build a starter light rail line in the centre of the city, its legacy metre-gauge tram network having closed in 1952.

The 4∙4 km route would connect the main line station with the Ospedale di Cisanello medical complex to the east.

The municipality has decided to press ahead with the scheme following completion of a feasibility study, which council members approved on August 11. The next step will see the project submitted to the Ministry of Infrastructure & Transport by early January as part of an application for national funding to develop sustainable urban transport.

The line will have 13 stops, crossing the River Arno at the site of the existing Ponte della Vittoria, which will be demolished and rebuilt to carry tram tracks and cycle lanes. The terminus serving the Cisanello hospital will be located within an existing car parking zone, which will be modified to serve as a multimodal park-and-ride hub.

The estimated cost of the tramway is €125m, and the municipality expects to complete the works in 770 days after the start of construction.