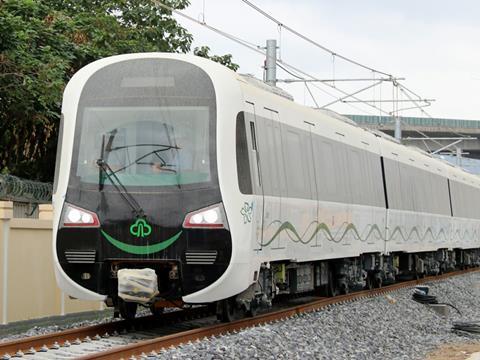 CHINA: The second metro line in Fuzhou opened for revenue service at 09.30 on April 26. The underground Line 2 runs for 30·6 km from Yangli in the east to Suyang in the west, serving 22 stations.

The National Development & Reform Commission approved the line in November 2012. Construction began in November 2014 and cost 21·3bn yuan, with some of the financing coming from the private sector.

Interchange with the north-south Line 1 is provided at Nanmendou, and three more stations are to become interchanges once future lines open.

CRRC Tangshan has supplied a fleet of 31 six-car Type B trainsets, which are stabled at a depot near Gushan station in the east. The 80 km/h trains draw power from 1·5 kV overhead and have a capacity of 1 880 passengers. All stations have provision to accommodate eight-car sets.

Extensions are planned at both ends: to Mawei Port in the east, serving 11 stations, and to Zhuqi in the west, serving three stations.

Four new lines are planned to open in 2021-22. In addition to the conventional lines 4, 5 and 6, Line F1 to the airport would run at up to 140 km/h. Four further lines would open in the longer term.