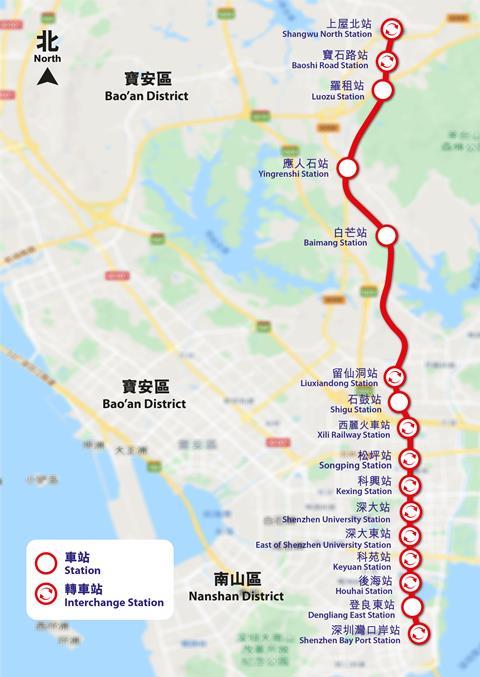 CHINA: The Shenzhen Municipal Government has award a joint venture of MTR Consulting (Shenzhen) Co (83%) and China Railway Electrification Bureau (Group) Co (15%) a public-private partnership contract to supply rolling stock and railway systems for the future metro Line 13 and operate the line for 30 years after completion in 2023. The municipality retains the remaining 2% stake.

Line 13 will run 22·4 km from Shenzhen Bay Port in the south to Shangwu North in the north, with 16 stations to support development in the Shenzhen Houhai Central Area, Liuxiandong headquarters base industrial park and Guangming New Town. Civil works are being undertaken by Shenzhen Metro Group.

The PPP contract announced on August 3 covers tracklaying, rolling stock and the electrical and mechanical systems, including signalling and automated fare collection equipment. These have a total capital cost of 4·91bn yuan, which is to be financed with both debt and equity.

‘We are delighted to be awarded the Line 13 PPP project and to participate in the railway network development of Shenzhen again after Shenzhen Line 4 and Line 4 North Extension’, said MTR Corp CEO Dr Jacob Kam. ‘Building on our proven expertise in operating international railway services and experience in serving commuters in Shenzhen since 2010, we look forward to working closely with the Shenzhen Metro Group and delivering safe, reliable and convenient metro service to serve more commuters in this city.’