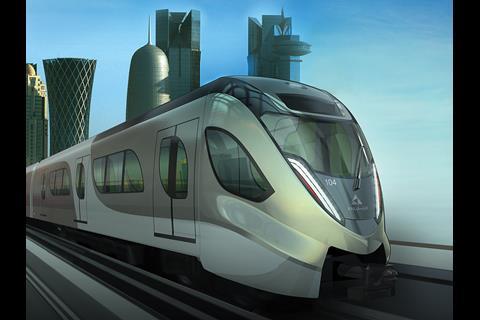 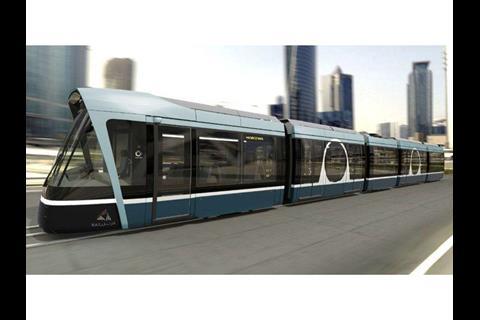 ‘Across our projects, our build and design stages have been guided by the powerful coming together of tradition with modernity’, said Qatar Rail's Managing Director Abdulla Al Subaie on April 17. ‘Deeply entrenched in Qatari culture and heritage, the Lusail Tram and Doha Metro designs celebrate the convergence of our country's history with groundbreaking technologies and cutting-edge solutions.’

The metro trainsets are branded Al Faras, after the Arabian mares which have been prized for war or for racing since ancient times. Qatar Rail said the name symbolises intelligence and speed, representing the advanced technology used on what will be ‘one of the fastest driverless trains in the world’ with speeds of 100 km/h. The ‘dynamic shape’ of the horses inspired the front ends of the vehicles, which are ‘powerful yet slender and elegant’ with the shape of the windows resembling a horse’s eyes.

Each of the 75 trainsets will have two standard class cars with 88 seats and one car split between Gold class with 16 seats and Family class with 26 seats. The interiors will be 'inspired by the progressive architecture present in Doha skyline, combining traditional and modern elements.’

Kinki Sharyo is to design and build the metro trainsets its Osaka factory in Japan, as part of the metro’s railway systems consortium which is led by Mitsubishi Heavy Industries. The styling is the result of ‘close co-ordination with Qatar Rail and our aesthetic design team’, according to Thierry Boussillon, Deputy Programme Director at Mitsubishi Heavy Industries. ‘It combines the most modern technology with a unique yet elegant shape, and Qatari culture and heritage.’

The trams for the Lusail LRT network are branded Al Mehmel, and inspired by a type of traditional dhow used for pearl fishing. The design concept focuses on the sea, with ‘calm, cool, elegant and tranquil elements of that medium’.

The 33 km tramway is being built by a consortium led by Alstom and the QDVC 51:49 joint venture of Qatari Diar and Vinci Construction Grands Projets. The 28 Citadis trams will be 32 m long 100% low-floor vehicles offering ‘high-end passenger comfort’ and designed for extreme weather conditions. They will use the APS ground-level power supply system.

‘There are currently more than 1 800 Alstom light rail vehicles in operation throughout the world’, said Gian Luca Erbacci, Alstom Senior Vice-President, Middle East & Africa. ‘Each Citadis has its own specific design and is customised to reflect its city's image and culture. We are very happy to have partnered with Qatar Rail to come up with a unique design that will certainly please the passengers and residents of Lusail.’

Qatar Rail reported that 99 km out of 111 km of tunnelling for the Doha Metro had been completed as of the first week of April, and 35% of construction works for the Lusail LRT were complete. The first phase of the metro is expected to be completed in 2019-20, with the tramway following in 2020. Completion of the metro, four-line tram network and a long-distance railway linking Qatar with the GCC Rail network is expected by 2030.

‘The official unveiling of the Doha Metro and Lusail Tram designs is an occasion for us to look at how close we've come to bringing our vision to life’, said Saad Ahmed Al Muhannadi, CEO of Qatar Rail. ‘This new milestone is an opportunity for us to bring the progress of our projects back to the future of transport in Qatar; one that is designed and built to world-class standards of modernity and innovation but, most importantly, that remains deeply rooted in our country's history and community.’