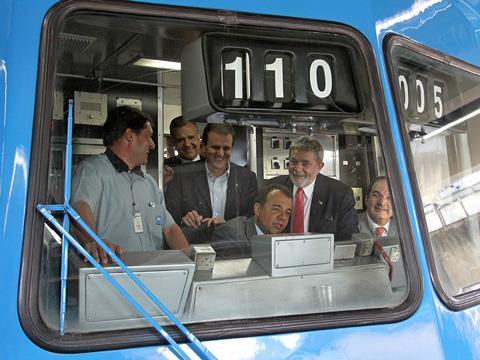 BRAZIL: President Lula inaugurated a 540 m extension of Rio de Janeiro metro Line 1 from Cantagalo to Ipanema/General Osório on December 21. He then travelled to Maracaña station on Line 2, using a new section of track between São Cristóvão and Central which has been under construction since November 2008.

Trains from Pavuna on Line 2 now join Line 1 at Central, alleviating the former bottleneck at Estácio, and continue to Glória or Botafogo. This is expected to reduce the journey time from Pavuna to the city centre by 13 min and allow an reduction in train headways on the Central — Botafogo section from 4 min 10 sec to 2 min 45 sec during peak hours. Cidade Nova station will open in March.

A further extension of Line 1 from Saens Peña to Uruguai will open by 2014, when Brazil will host the FIFA World Cup. However details of plans to expand the metro network in time for the 2016 Olympic Games have yet to be released.