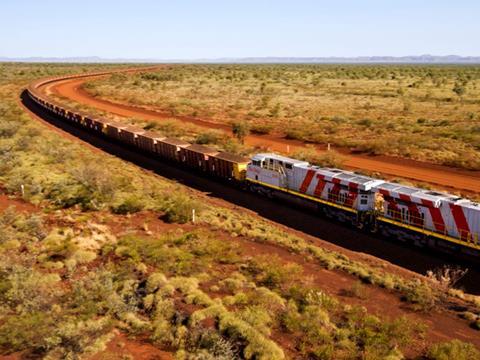 AUSTRALIA: Rio Tinto has successfully operated its first fully-autonomous freight train on its iron ore network in the Pilbara region of Western Australia, the company announced on October 2.

The 100 km pilot run from Wombat Junction to Paraburdoo was completed without a driver on board. Throughout the trip, the train was closely monitored in real time by Rio Tinto teams and representatives from the Office of the National Rail Safety Regulator, both on the ground and at the Operations Centre in Perth.

Under its AutoHaul project, Rio Tinto is equipping a fleet of around 200 locomotives operating on more than 1 700 km linking 16 mines to four port terminals. This is part of a wider ‘mine of the future’ programme to automate its mining and production processes, which aims to improve safety, boost productivity and reduce environmental impact.

Rio Tinto has been running trains in autonomous mode since the first quarter of 2017, but retaining a driver to supervise the automated operation. The company reports that ‘about 50%’ of train-km are being completed in autonomous mode with drivers on board, while the AutoHaul equipment is ‘enhancing’ the movement of around 90% of its production tonnage. Among the benefits already being realised are reduced variability in train performance and increased average speed across the network, helping to reduce cycle times.

Completion of the first fully-autonomous pilot run is seen as a significant step toward full commissioning of AutoHaul, once all of the relevant safety and acceptance criteria have been met and regulatory approvals obtained. The company now expects to achieve full commissioning in late 2018.

‘This successful pilot run puts us firmly on track to meet our goal of operating the world’s first fully-autonomous heavy haul, long distance rail network’, said Rio Tinto Iron Ore Chief Executive Chris Salisbury. ‘Rio Tinto is proud to be a leader in innovation and autonomous technology in the global mining industry which is delivering long-term competitive advantages. New roles are being created to manage our future operations and we are preparing our current workforce for new ways of working to ensure they remain part of our industry.’