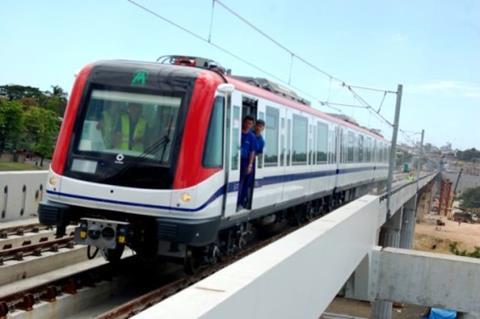 Speaking at the launch, Diandino Peña, MD of OPRET (the organisation responsible for reforming transport in the Dominican Republic), described the event as the start of a new era, when Santo Domingo joined the ranks of 'cosmopolitan cities' served by an underground metro.

Following a successful trial period between December 22 and January 6, when more than two million passengers travelled on the metro for free, the 14·5 km line was closed so that final adjustments could be made before opening.

Construction of the metro from Mamá Tingó in the north to Centro de los Héroes in the south, serving 14 intermediate stations, commenced in 2005. Trial running began in February 2007, when President Fernández travelled on the first train to run on the line.

The fleet of 19 Alstom Metropolis three-car trains is expected to carry an estimated 175 000 passengers per day. Ticket price is 20 pesos. The line cost around RS$25bn (US$699m) to build and is likely to require an operating subsidy of US$25m in 2009.

A second 22 km metro line between Los Alcarrizos and San Luis is already under discussion and a further four lines are on the drawing board.