Autonomous electric bus ready to be trialled in Singapore 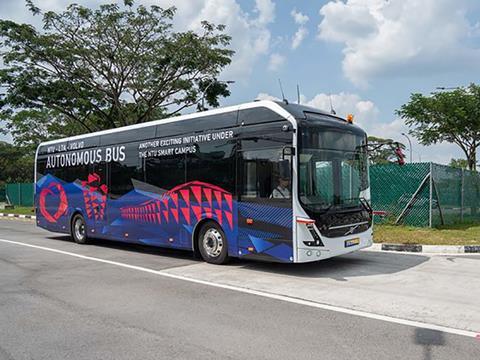 SINGAPORE: Volvo has unveiled its first autonomous fully electric bus designed for passenger use, which is to undergo trials on the Nanyang Technological University campus.

The Volvo 7900 Electric bus is equipped with sensors and navigation controls managed by an artificial intelligence system developed by NTU researchers. These include LIDAR sensors, 360º cameras and a global navigation satellite system which uses real-time kinematics and multiple data sources to give a location accuracy of up to 10 mm. This is linked to an inertial management unit which measures lateral and angular movements to improve navigation over uneven terrain.

The vehicle is 12 m long and has a capacity of 85 passengers. According to Volvo, it uses 80% less energy than an equivalent-sized diesel bus.

Preliminary testing has been carried out at NTU’s Centre of Excellence for Testing & Research of Autonomous vehicles, ahead of trials on the NTU campus and then beyond the university.

‘Our electric bus featuring autonomous technology represents an important step towards our vision for a cleaner, safer and smarter city’, said Håkan Agnevall, President of Volvo Buses, on March 5. ‘The journey towards full autonomy is undoubtedly complex, and our partnership with the NTU and Land Transport Authority is critical in realising this vision, as is our commitment to applying a safety-first approach.’