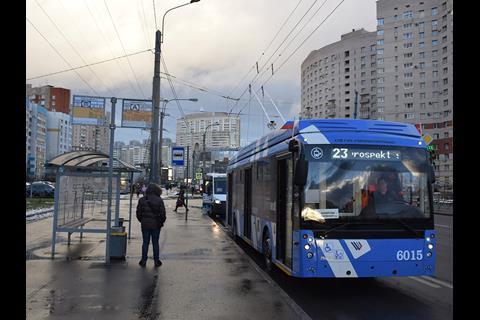 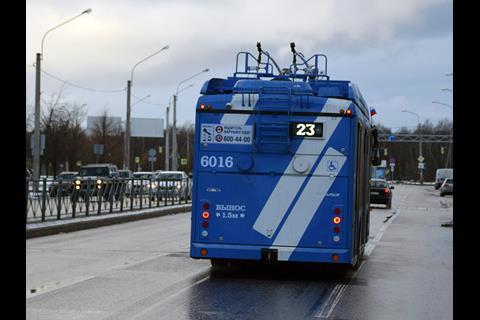 Route 23 has been extended eastwards from its previous southern terminus to serve Bogatyrsky Prospect and adjacent streets, which currently have no wires. More than half of the 14 km route now runs without wires.

The 12 Trolza Megapolis trolleybuses have Toshiba and Liotech batteries, with an off-wire range of 7·5 to 15 km depending on loading. The trolley poles raise and lower automatically when the trolleybus moves into or out of an area with wires.

Services operate at 10 min headways for most of the day, and to avoid confusion with traditional bus or trolleybus routes, a new symbol for wireless trolleybus stops has been introduced.

The battery trolleybuses were originally purchased under a plan to remove all overhead wires, including telephone and electricity wires, from the 4 km Nevsky Prospect. However, practical considerations eventually caused these plans to be cancelled, and the buses are now being deployed on routes with no wires.

A contact in June for 86 Trolza and 25 Belkommunmash trolleybuses, subsequently enlarged to 115 vehicles, has run into delays. So far only 70 Trolza and five BKM vehicles have arrived.

Five more routes that would use battery trolleybuses to serve wire-free sections are under consideration, including route 41 in the southeast.