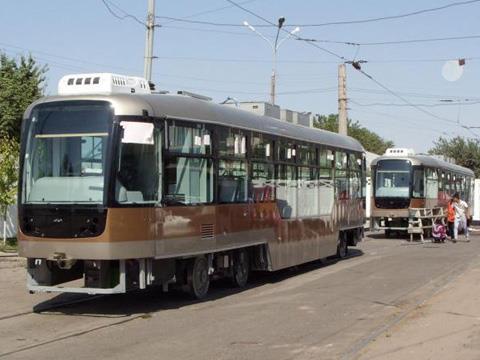 UZBEKISTAN: Celebrations marking the 20th anniversary of independence on September 1 included the launch of the first two of 20 VarioLF low-floor trams supplied by the Alliance TW Team consortium of Czech manufacturers Pragoimex, KOS Krnov and VKV Praha. The rest are scheduled to arrive next year.

'These trams meet all European standards and are equipped with modern electronic controls that can save up to 40% of electricity', Farrukh Kadyrov of tram operator Toshelektrotrans told national news agency UzA. 'They are designed to work in almost any weather conditions from -40C to +70C, and can withstand voltage fluctuations from 400 V to 900 V.'

The US$19·8m order was financed by the national Fund for Reconstruction & Development as part of a programme to modernise the capital's transport infrastructure. Four tram routes are being built or modernised this year. So far a 7·1 km Taraqqiyot Street - Mukimi Street line, 2·7 km along Samarkand Darvoza Street and 3·8 km from Beshqayragach Street to Ibn Sino, have been completed, and work is underway on a 2·5 km Fargona Yuli - Alimkent Street route. Lines are planned from the main station to Yangiobod and from Kuylyuk to Chkalov metro station.