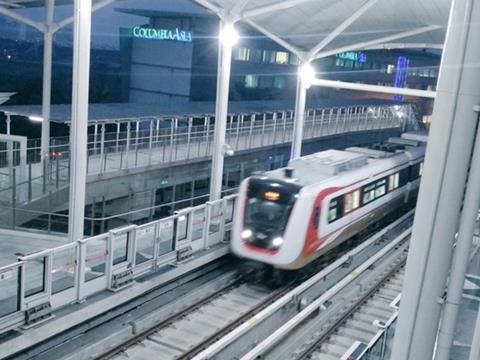 INDONESIA: The first section of the Jakarta light metro started trial operation on June 14, ahead of the planned launch of revenue services on June 21.

The 4·5 km elevated route between Kelapa Gading Mall and Velodrome serves five stations. A northern 1·3 km one-station extension from Kelapa Gading Mall to Pegangsaan Dua is due to open on June 21. Headways are currently 10 min, and this will change to 5 to 15 min once revenue services begin.

Hyundai Rotem has supplied eight two-car trainsets from its Changwon factory in South Korea. These draw power from a third rail and are stabled at a depot north of Kelapa Gading Mall.

Further extensions are planed at both ends of the route. The light metro is a separate project from Jakarta’s underground heavy metro which opened in March.