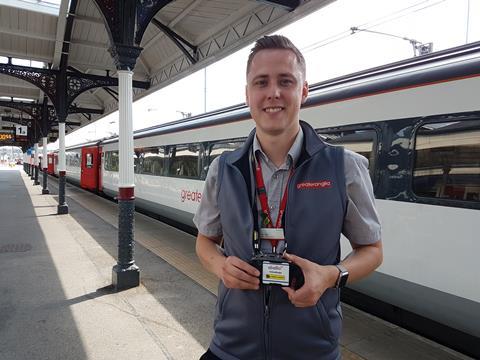 UK: All Greater Anglia conductors now have access to ‘badge cams’ containing small video cameras which are used to deter anti-social behaviour and assaults on staff.

The badge camera works by constantly recording but not actively storing footage until a flap is flicked. Once the camera is activated, it will keep filming until it is stopped; 30 sec of footage prior to the activation is also automatically stored. Green and red lights and a camera symbol make clear that a recording is being made.

‘We want to protect our staff at all times, and the badge cams will help to stop disagreements escalating to the point where someone becomes abusive’, said Mark Burgess Lawrence, the operator’s Crime & Intelligence Manager. ‘Assaults on other customers are thankfully extremely rare, so this is about protecting our staff – but everyone benefits as its unsettling for everyone when an altercation occurs.’