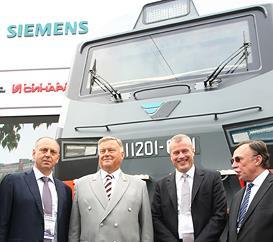 The locomotive has been produced at the Siemens-Sinara joint venture’s plant near Yekaterinburg using traction equipment from Siemens, and it is designed for operation on AC networks throughout the 1520 region. The twin-section, eight-axle locomotive has already completed 5 000 km of test running at the Russian Railways test centre at Shcherbinka; it is capable of hauling trains of up to 9 000 tonnes, Siemens says.