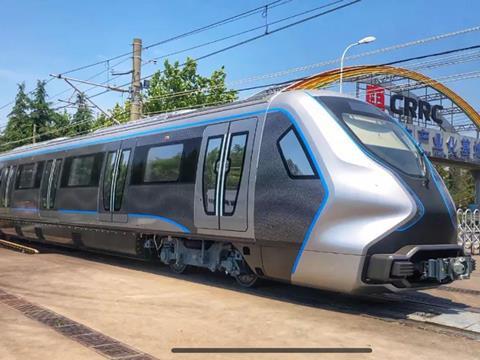 CHINA: A prototype ‘next-generation’ metro car developed by CRRC Qingdao Sifang using materials including carbon fibre has been tested in Qingdao, and plans are being developed for testing in other cities.

CRRC unveiled a Cetrovo metro vehicle at InnoTrans 2018, saying it was the first metro car with a carbon fibre bodyshell. The manufacturer has produced three prototypes, with one used for structural testing and two for trial running.

Announcing the successful completion of trials in Qingdao during June, CRRC Qingdao Sifang’s Deputy Chief Engineer Ding Sansan said the next-generation car was 13% lighter than the previous models, and along with the silicon carbide inverter and permanent-magnet synchronous motors this could reduce energy consumption by more than 15%.

Features to improve passenger comfort include sound-proof materials to reduce interior noise, and ‘smart’ air-conditioning and lighting. The windows act as touchscreen computers which passengers can use to access the internet and watch videos.

The car is designed for fully automated operation at a maximum speed of 140 km/h, compared to the 80 km/h of previous designs. An intelligent monitoring system provides real-time fault alerts to support condition-based maintenance.