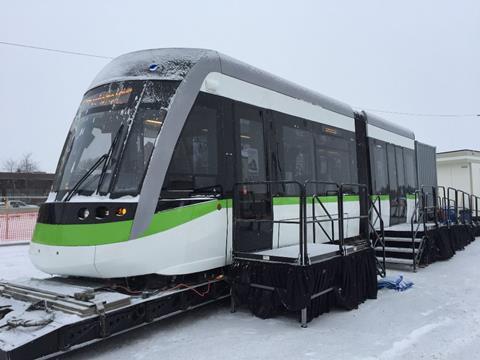 CANADA: A mock-up of a light rail vehicle for Edmonton’s Valley Line was presented to officials on February 2.

Bombardier Transportation is supplying 26 LRVs for the first phase of the project as part of the TransEd Partners consortium, which has a PPP contract to design, build and finance the line, and provide 30 years of operations and maintenance. TransEd Partners also includes Fengate Capital Management, Bechtel, Ellis-Don, Transdev, Arup and IBI Group.

The low-floor LRVs would have capacity for 275 passengers. They will operate on the 13·1 km line with 12 stops that will link 102 Street in central Edmonton with Mill Woods to the south.

A groundbreaking ceremony took place in April 2016, and opening is scheduled in 2020. The City of Edmonton is contributing C$958m towards the project cost, with a further C$600m coming from the government of Alberta, up to C$400m from the federal government, C$250m from P3 Canada and C$150m from the New Building Canada Fund.

In the longer term, Stage 2 would extend the line west from the city centre to Lewis Farms, adding 16 stops.