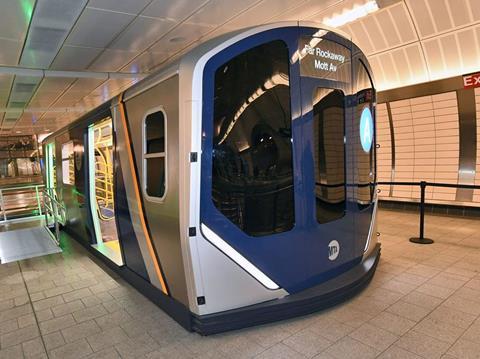 USA: The New York Metropolitan Transportation Authority board voted on January 24 to approve the purchase of 535 metro cars from Kawasaki Rail Car Inc for $1·4bn. The contract includes options for up to 1 077 additional cars, which would bring the order value to $3·7bn if they are exercised.

Kawasaki is to supply 440 closed-gangway cars for the B Division, which are the New York Subway lettered routes; these will be equipped for operation under CBTC. It will also supply 75 cars for Staten Island Railway, and a further 20 open-gangway cars as part of a pilot programme.

The R211 cars would feature doors 1 475 mm wide, compared with the previous MTA standard width of 1 270 mm. They would also be equipped with digital real-time passenger information displays and brighter lighting.

‘The R211s will be a welcome addition to New York City Transit’s next-generation fleet’, said MTA Managing Director Ronnie Hakim. ‘As both the R160 and R188 subway cars produced by Kawasaki have proven to be some of the most reliable in their class, we look forward to working with Kawasaki on the production of these cars.’

Deliveries are due to begin in 2020 and will include spare parts and diagnostic test equipment. Funding will be provided by the Federal Transit Administration. The vehicles will be assembled and tested at Kawasaki’s sites in Yonkers, New York and Lincoln, Nebraska.

MTA says that this is the first New York City Transit contract to stipulate the inclusion of a ‘US Employment Plan’ to create US jobs. Kawasaki and its subcontractors have committed to provide around 470 jobs in the US, with a total estimated value of $125m. If all options are exercised, the total potential value of US jobs is estimated to reach $270m.