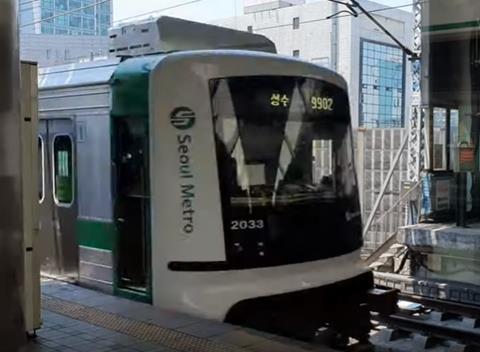 SOUTH KOREA: The first of 22 trainsets that Seoul Metro ordered from Hyundai Rotem in 2017 has entered passenger service on Line 2.

The 176bn won contract for 21 10-car sets and one four-car set to operate a shuttle service was placed in July 2017. Seoul Metro has so far received six of the Series 2000 trains, and four more are due to be delivered by the end of the year. These 10 are all due to be in passenger service by the end of March, and deliveries of the remaining trains are scheduled to be completed by the end of next year.

The trains feature real-time condition monitoring and seats that are 50 mm wider than those on the existing Line 2 fleet.

Last year 20 Series 2000 trainsets of the previous generation arrived in Seoul. Together with the trains currently on order, these will allow most of the older Line 2 fleet of 46 10-car sets to be replaced.