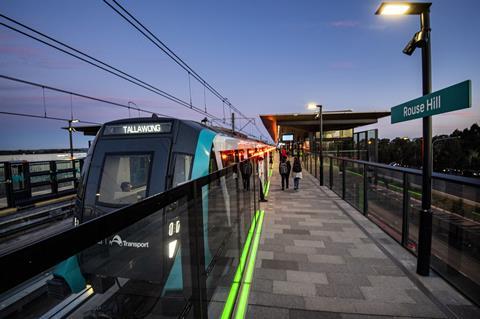 In 2014 the consortium of MTR Corp, John Holland, CPB Contractors, UGL Rail and Plenary Group was awarded a PPP concession covering the first phase of the driverless metro, which entered service in May this year. The option is worth A$1·7bn for rolling stock and core railway systems, and a further A$2bn for operations and maintenance of the extended line to 2034.

Alstom is to supply a further 23 six-car driverless Metropolis trainsets from its Sri City factory in India, in addition to the 22 that it supplied for the initial phase, as well as Urbalis 400 CBTC signalling. Thales signed is supplying control and communications systems under a A$250m contract signed with MTR Corp.

The City & Southwest extension from Chatswood to Bankstown will add 15 km of new alignment with seven stations through the city centre and convert 13 km of existing heavy railway to metro standards, with 11 stations. The existing Rouse Hill depot will be expanded and a second depot is to be built at Sydenham.

Once the second stage opens in 2024, the Sydney metro would serve a 66 km route between Rouse Hill in the north and Bankstown in the south with 31 stations.