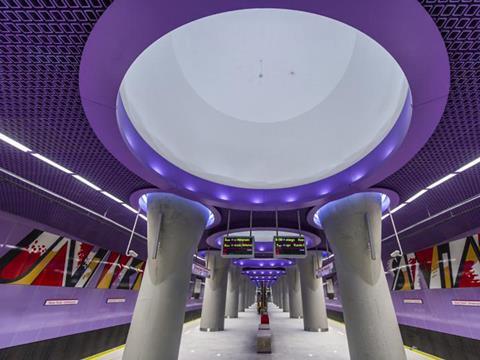 POLAND: The second line of the Warszawa metro opened on March 8 with the departure of the inaugural train from Świętokrzyska at 9.40. Although no official opening ceremony took place, the first train carried Mayor Hanna Gronkiewicz-Waltz, and travel was free on the first day of service, and 233 000 passenger-journeys were made.

The 6·5 km east-west route links Rondo Daszyńskiego and Warszawa Wileńska with seven stations and includes an 870 m tunnel under the Wisła River. Line 2 intersects with the north-south Line 1 at Świętokryzska, and interchanges are also provided with main line rail services at Stadion Narodowy and Wileńska. The end-to-end journey time is around 10 min, and services run every 3 min.

The construction contract was signed in October 2009 by a consortium of Astaldi, Gülermak and Przedsiębiorstwo Budowy Dróg i Mostów, which created the special purpose company AGP Metro. Total cost of construction and rolling stock was 5·9bn złoty, which included an EU contribution of 3·1bn złoty.

Civil works began in late 2010. The line was due to open in late 2014, but difficulties with building Centrum Nauki Kopernik station led to delays. The Siemens fleet had to cover 5 000 km without failures before the line could open, and this was completed on March 6.

It is envisaged that in the 2014-20 EU budget period Line 2 will be extended by three stations to the west and three stations in the east on a branch diverging at Stadion Narodowy. The eastern branch is intended to be the first phase of the third metro line, but would initially be operated as part of Line 2. A public consultation is underway and tenders should follow soon.