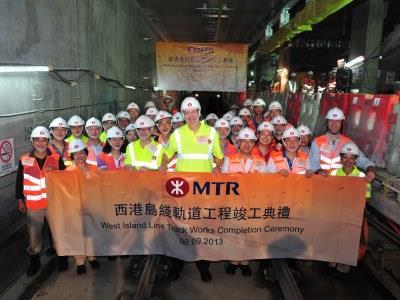 CHINA: A ceremony was held at Hong Kong University station on September 8 to mark the completion of tracklaying on MTR Corp’s 3 km West Island Line between the existing Sheung Wan station and the over-run tunnel beneath Kai Wai Man Road in Kennedy Town. With the new extension now connected to MTR’s Island Line, materials for electrical & mechanical fit-out can be delivered by rail, including OLE cabling as well as telecommunications and signalling equipment.

Speaking at the ceremony, MTR Corp Chief Executive Officer Jay Walder said that tracklaying had been completed in 13 months. He thanked the local community for their support and understanding as MTR worked to deliver the project ‘on time for opening in 2014’.

Now 80% complete, the West Island Line will serve stations at Sai Ying Pun, Hong Kong University and Kennedy Town. MTR says that over 90% of residents in the Western District of Hong Kong Island ‘will enjoy convenient access to the railway by foot’.