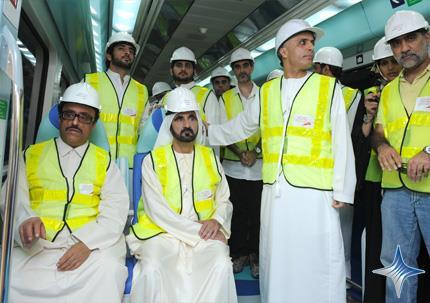 The train ran for 11 km between Jebel Ali and Ibn Battuta station on an elevated section at the outer end of the Red Line.

During his visit, Sheikh Mohammed also commissioned the metro's wi-fi internet service, which will cover all trains operating on the Red and Green lines, allowing passengers to use a laptop during their journey. Mattar Al Tayer, Chairman & CEO of the Roads and Transport Authority, explained that 19 pedestrian crossings were to be installed along Sheikh Zayed Road to facilitate access to the metro stations.

At present there are more than 24 000 engineers, technicians and workers involved in the construction of the metro network. With 44 trainsets needed in time for the scheduled opening of the Red Line on September 9 2009, Kinki Sharyo is currently delivering four of the five-car sets per month. Tracklaying is reported to be progressing at 500 m per day.

Once completed, at an estimated cost of 15·5bn dirham, the Dubai metro will be the world's largest fully-automated metro, with 75 route-km serving 47 stations, of which 10 are underground.